Your donations help support development and improvements to the site. Thank you for your support!

The 6 Lives of the Fort Wilderness Railroad

I hope all of you are doing well!

A quick note on the Fort Wilderness Railroad book: it's now available on Amazon and Barnes and Noble! I re-visited the book and revampedsome of the formatting, spelling, grammar, and credits. The biggest event was going to a new printer. I was using LuLu Press. The qualitywas "ok" but the price was quite high. I was able to work with CreateSpace, the printing arm of Amazon. They are now printing thebook. The quality is much better and the price is about half that of Lulu.

The book has continued to sell since 2010 with many copies sold overseas. There seems to be an appetite for the book and its contents in Germany, Russia, and China. Who would have thought that!

Thanks again to all of you for your help and encouragement. Without you, the book would have been much smaller and less detailed, or maybe would not have even happened.

Not quite like a cat…but the railroad did have six lives!

Unlike the WDW Railroad in the Magic Kingdom, the Fort Wilderness Railroad (FTW RR) had six lives. The WDW Railroad layout, engineering, and operation are pretty much the same as the opening day in 1971. The FTW RR began operations in the late spring of 1973 and ended operations in February of 1980. But during that roughly 7 years of operation, the railroad passed through 6 different lives.

Each of these lives has its own story, but the one most folks seem to remember is Life #5. This was the highlight of the railroad’s operation in terms of the number of cast members, number of trains running at a time, and guests riding the railroa

Just prior to the railroad taking on this life, the track was re-built. Oh, did it need it! It was getting pretty ugly. The poor job of laying the track in the first place was finally taking its toll. So George Britton from the Magic Kingdom headed a crew that pulled the rail, re-laid it with tie plates, and did rail bending for

the curves. Unfortunately, the money was not available to completely re-do the track. This would be the railroad’s downfall come February 1980. That’s a whole story by itself!

So, in May 1976, the railroad opened ready to work with the buses and trams to get guests from the front parking area at the Gateway Depot (now Outpost Bus Depot) to the newly opened River Country. The biggest noticeable change was the relocation of the Settlement Depot closer to the Tri-Circle-D Ranch. This eliminated the need for guests to navigate the Fort Wilderness Trail-Big Pine Road intersection while also cutting down on the walking distance to River Country. 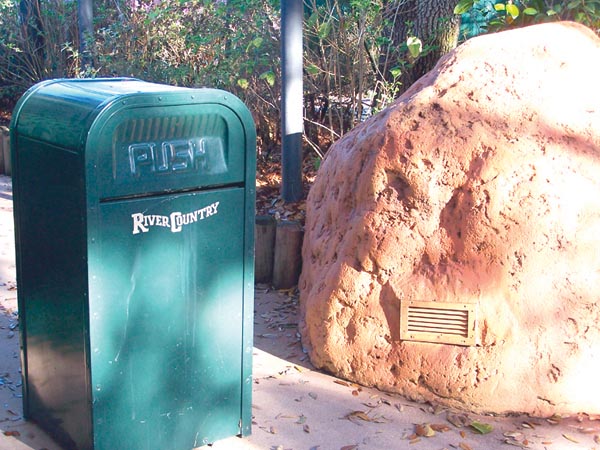 In the other lives, usually one maybe two trains ran concurrently. During River Country Transport, usually three trains ran at the same time and the fourth was added during busy times. This really added to the excitement at the Fort for the railroad. Lots of guests riding the train, lots of cast member wearing striped overalls, and lots of whistle sounding across the countryside.

During this time, a lot of guests were transported. Fully loaded the train would hold 90 guests, while the trams held 150. So Disney experimented at one time by adding an extra car to the train to get more

capacity. What a mess! The train was too long to fit into the depots, and guests had to squeeze into and out of the fifth car. Easy to say this didn’t last too long. But an interesting note here for the railfans…the locomotives were so well designed that adding a sixth car full of people was no big deal. The locomotives pulled all six cars without any noticeable change by the engineer. Pretty neat!

In the summer of 1977, the cast members were starting to realize that Disney management felt the logistics of transporting people to River Country was not really working with the train as part of the picture. So, the trams and buses were left to this job, and the train moved into its sixth and final life as simply an “attraction.” Usually one train ran from 9:30 am to 5:00 pm. Admission was free with a River Country ticket, otherwise it was 50 cents.

Hope you enjoyed some of the tidbits about the railroad during this fun time over its six lives! This is a poster you might find interesting about this Life #5 – River Country Transport. 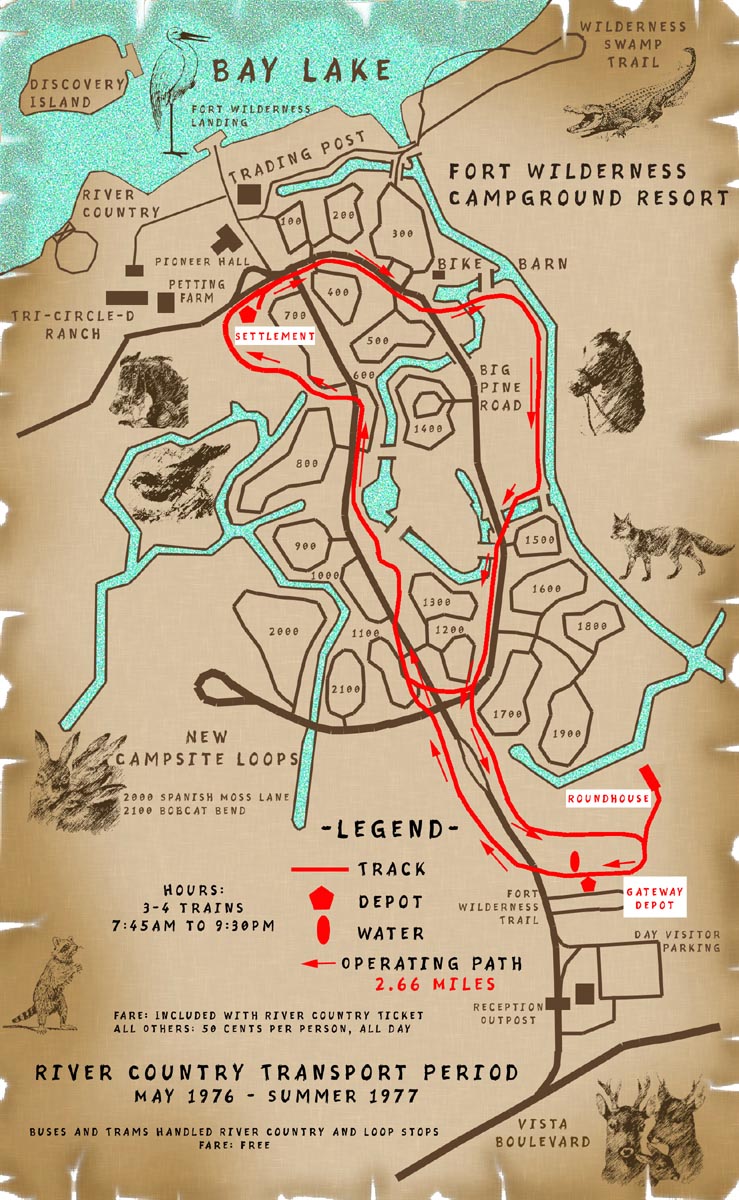