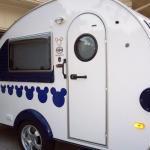 I totally/completely have no desire to return at this point. I do have a hotel reservation booked for Oct, but if our kids can't join us, (because they had not booked yet, and may not be able to book)