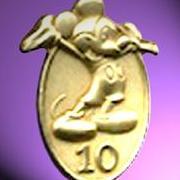 Cheap plastic Mickey medals brings out the worst in people.

Foul, foul, foul, I'm calling for the "Mickey Cheap Plastic Medal" judge to rule on this bogus and outrages medal fraud. I say they're pity medals and should be disallowed as real cheap Mickey plastic

I may not read TRs but I sometimes look at the photos. Uh, whadya think, I'm blind? Did I notice, of course I did. But I have to ask the obvious question.